Riches of the Mekong

Cruise along the Mekong as you are transported back in time to another era, where the rhythms of the countryside move at a slower pace and allow for fascinating glimpses into a traditional way of life. Experience the lively hustle and bustle of open-air and floating markets, offering exotic produce. Delve into the peaks and valleys of Cambodia’s history in the museums of its beautiful capital, Phnom Penh. Browse the local workshops throughout Vietnam, where exquisite handmade silks, rattan mats, and other crafts make memorable souvenirs. On this transformative journey, the Mekong truly reveals a vibrant world along its shores. 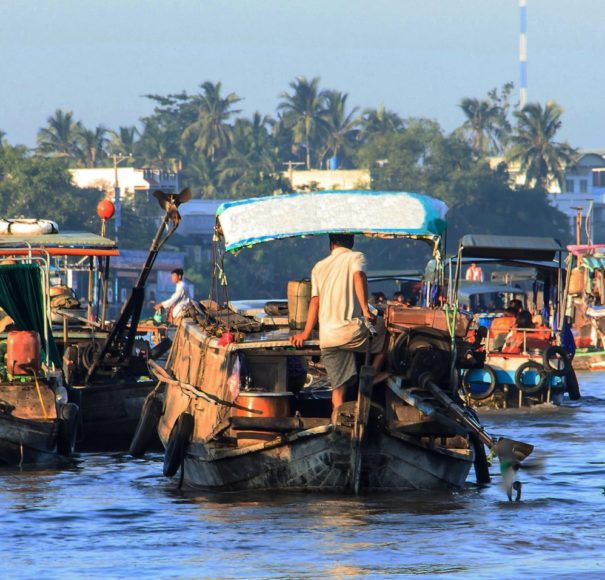 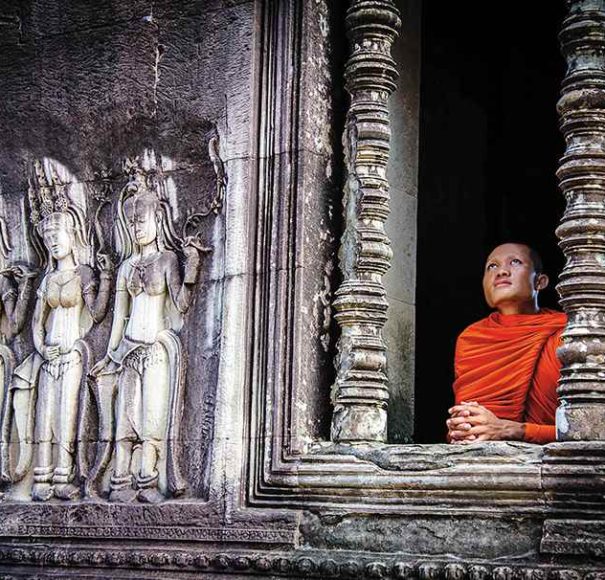 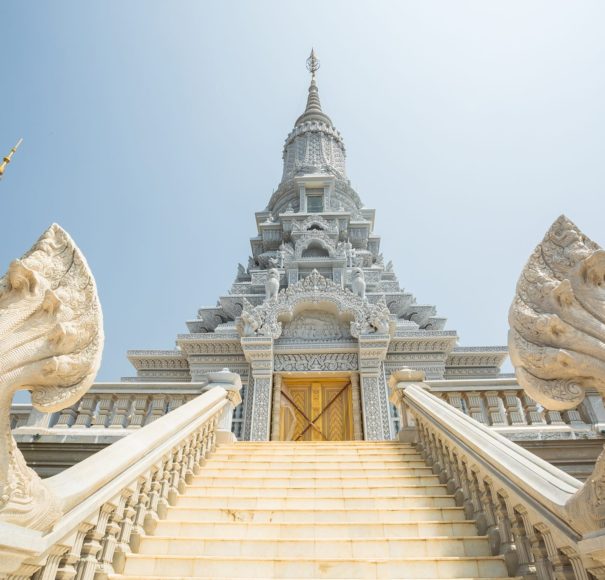 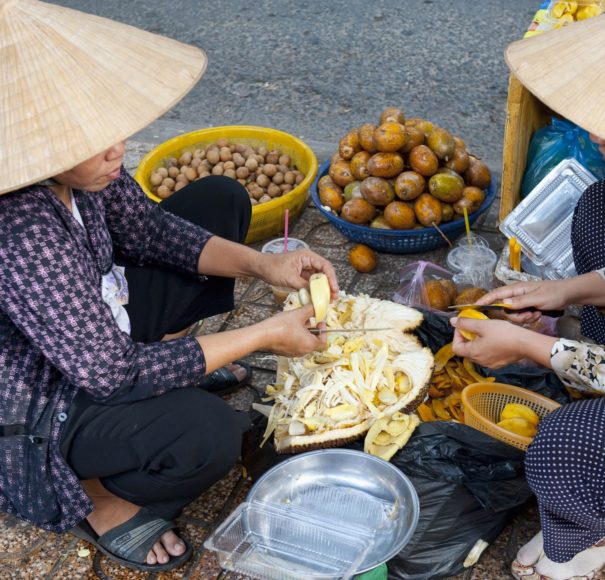 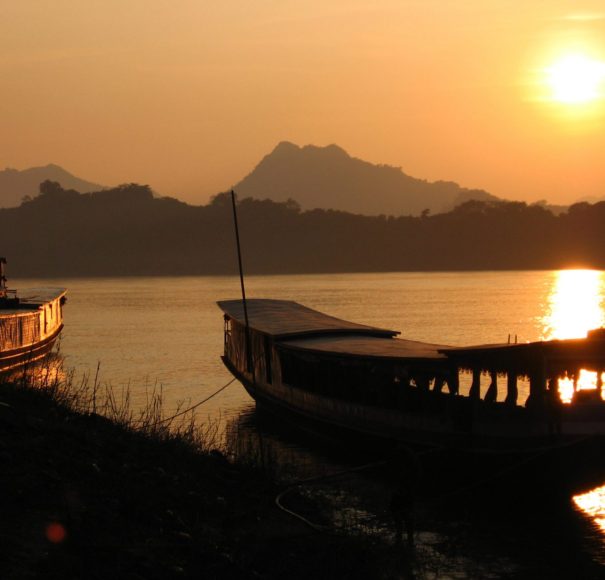 Arrive in Siem Reap for a 3 night hotel stay.

Siem Reap, Cambodia, the gateway to Angkor Archaeological Park, a UNESCO World Heritage Site and the former capital of the Khmer empire.

Begin your morning exploration of the Angkor temple complex at Angkor Thom, meaning the “Great City”. This is home to Bayon Temple, best known for its gigantic smiling stone faces, as well as the Terrace of Elephants and the Terrace of the Leper King. You’ll visit nearby Ta Prohm, known as the “kingdom of Trees”, for the way in which the temple stones have become intertwined with thick forest vegetation over the centuries.

Afternoon excursions take you to the fascinating jewel in the crown of Angkorian art, Banteay Srei, meaning “Citadel of Women” as it has been done by the hand of man. Afterwards you are in for a treat of a different kind with a visit to the English language school sponsored by AmaWaterways in the village of Ta Toum, cap this memorable day off with a special “Apsara Dance Show” at your hotel, featuring local Cambodian/Khmer folk dancers. 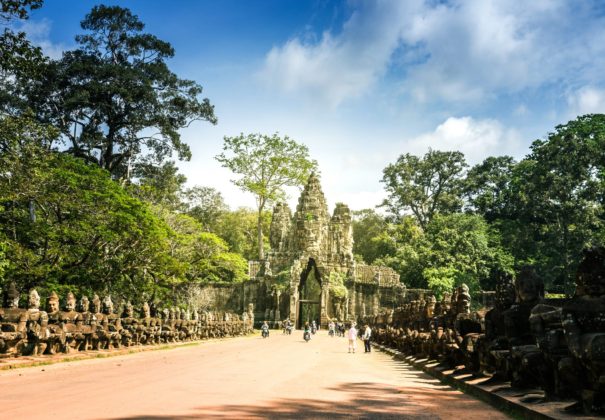 Discover the heart and soul of Cambodia and the most iconic of all Angkorian Temples Angkor Wat.

This is one of the largest religious monuments ever constructed and a true masterpiece of Khmer architecture built by King Suryavarman II in the early 12th century to honour the Hindu god, Vishnu. 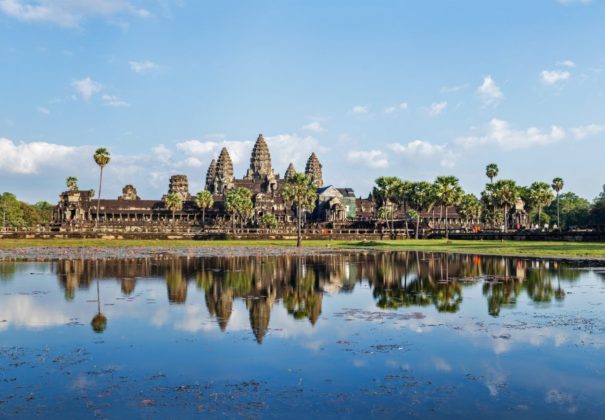 Transfer via coach to the AmaDara in Kampong Cham for your seven-night cruise. Board a motorcoach to the Twin Mountains, known as Phnom Pros and Phnom Srei (male and female mountains).

In the annals of Khmer legend, the twin mountains were formed as the result of a competition between the men and women of an ancient Cambodian kingdom to resolve which gender would be responsible for wedding proposals. 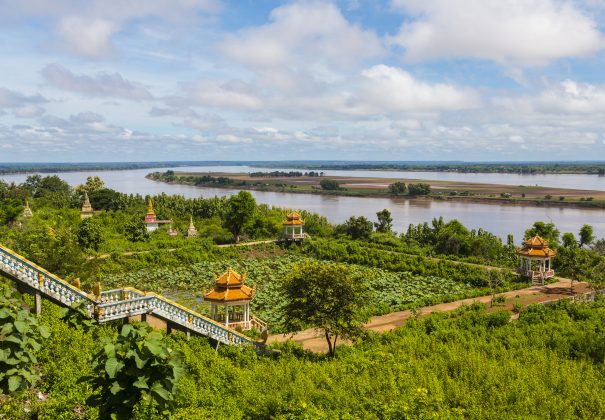 During the morning, go on a walking tour to Angkor Ban, one of the few villages in Cambodia that was not destroyed under the Khmer Rouge regime in the 1970s.

Here people still live in their traditional wooden abodes and keep their old cultural traditions alive. Hundreds of wooden houses stand intact on stilts, shaded with banana trees, among the hustle and bustle of the daily agricultural on-going of the local villagers.

After visiting here, the ship sails to Oknhatey or “Silk Island,” located on the lush banks of the Mekong River. This island is known for its rich tradition of silk weaving. While here, you’ll visit a local elementary school and observe the traditional silk weaving of handicrafts.

Your cruise continues to sail to Phnom Penh, the capital of Cambodia. 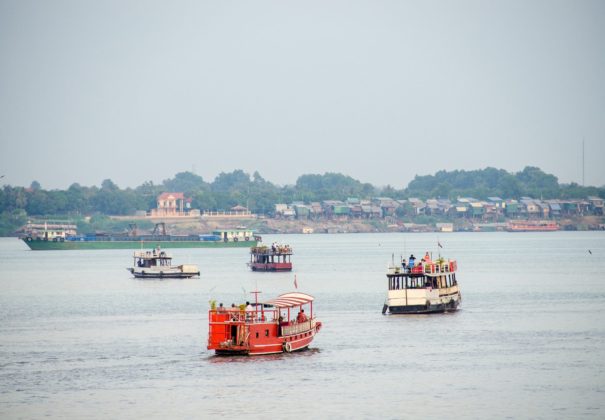 Your cruise continues to sail to Phnom Penh, the capital of Cambodia. The morning excursion takes you to Oudong, Cambodia’s former royal capital from the early 17th century until 1866.

Today, Oudong is a place of pilgrimage for Cambodians. While here, be treated to a memorable Buddhist Blessing Ceremony at a monastery.

After visiting Oudong, be treated to a truly authentic excursion, an oxcart ride through a local village Kampong Tralach.

Later in the day, experience Phnom Penh via a tuk tuk ride and be enchanted by the city’s French Colonial architecture and tree-lined boulevards set amidst monumental Angkorian architecture.

After returning to the ship, enjoy Khmer folk dancing performed by local children in the Saigon Lounge. 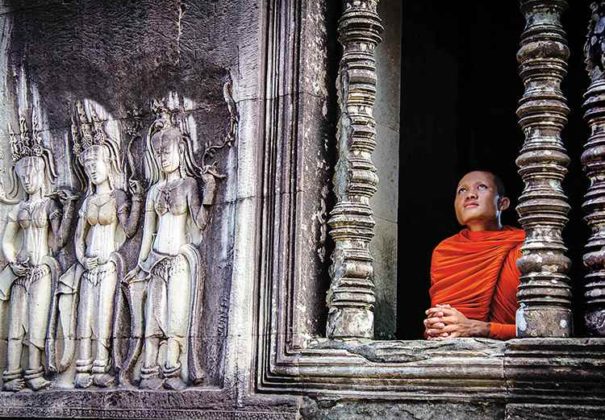 Alternatively, you may wish to shop for unique treasures at the bustling yellow-colored Central Market.

After lunch on board, you’ll explore the highlights of the city, followed by a visit to the Royal Palace, the spectacular Silver Pagoda and the National Museum, which has an outstanding collection of Khmer crafts. 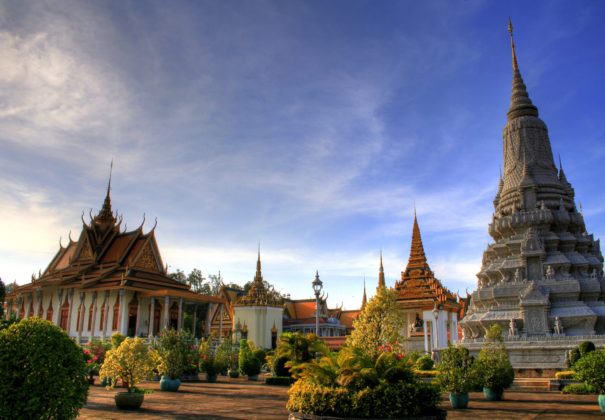 Spend the day cruising the Mekong River as your ship crosses the border into Vietnam. 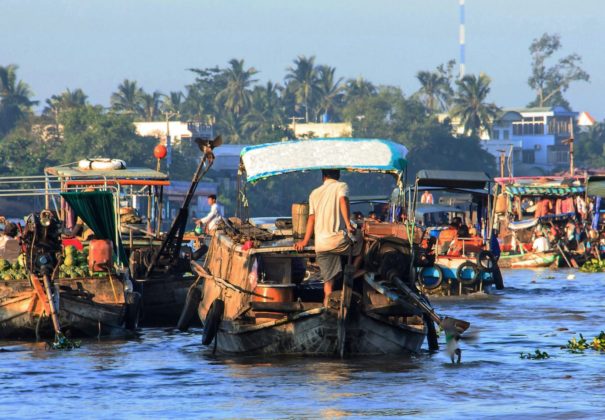 Enjoy a visit to Tan Chau, a small Mekong River town unspoiled by tourism. You will have the opportunity to take a traditional “xe-loi” (trishaw) ride around the town, with stops at silk-making and rattan mat workshops, followed by a boat ride through the narrow channels of the Mekong River to “Evergreen Island.”

Alternatively, simply take the boat ride to Evergreen Island and return to Tan Chau, where you will visit a rattan mat workshop.

Later in the day, cruise to Sa Dec 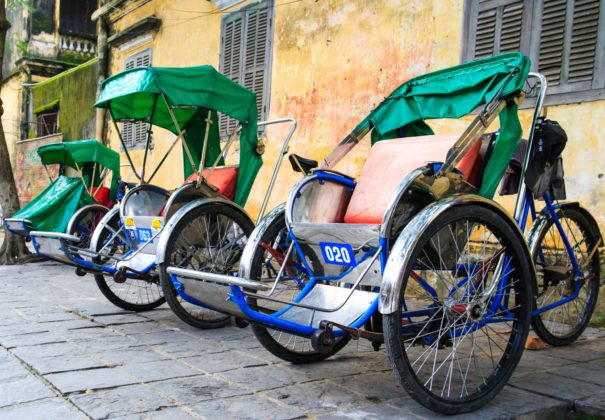 Once ashore in Sa Dec, tour the town where French writer Marguerite Duras spent many years in her youth. Visit a colourful local market and the 19th-century house of Mr. Huynh Thuy Le, Duras’ Chinese paramour. Later, board a motor coach for Xeo Quyt, once used as a base during the French and U.S. wars and now an important ecological site. You will have an opportunity to visit candy and rice paper making workshops and the historic Kiet Old House. Cap the day off with a festive Farewell Dinner on board. 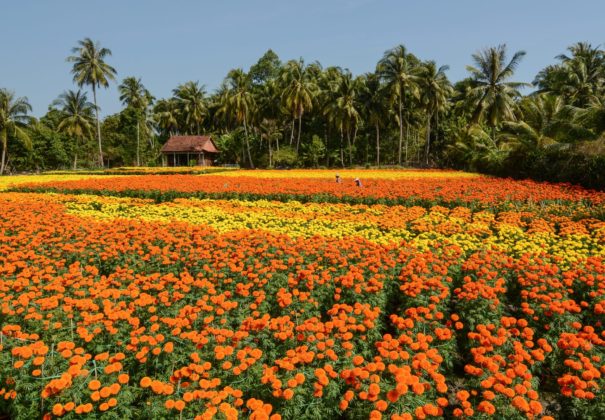 Your cruise comes to an end as the ship docks at My Tho Port. Transfer to Ho Chi Minh City, Vietnam’s former capital of Indochina was once known as the “Paris of the Orient”, and today, it is an industrial, cultural and educational hub. Explore such famous landmarks as the former presidential Palace, the Central Post office, Notre Dame Cathedral and the War Remnants Museum before visiting the Ben Thanh Market, one of the oldest and most iconic structures of Ho Chi Minh City. 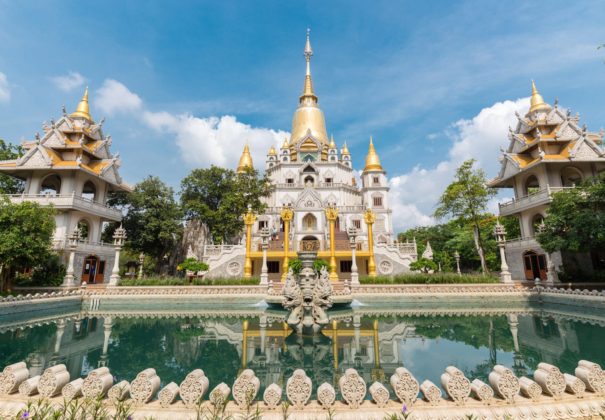 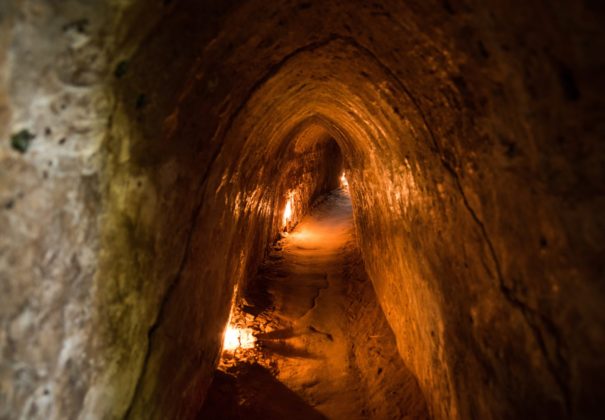 Bid farewell to Vietnam as you prepare to leave.

Hanoi, Vietnam’s capital city boasts a rich cultural heritage that blends in harmony with its vibrant present. From ancient temples to French Colonial architecture and modern-day skyscrapers, along with beautiful parks and lakes, Hanoi is an eclectic and lively city.

Discover some of Hanoi’s most famous historic and cultural sites on your guided tour that includes: Ba Dinh Square and The Temple of Literature. 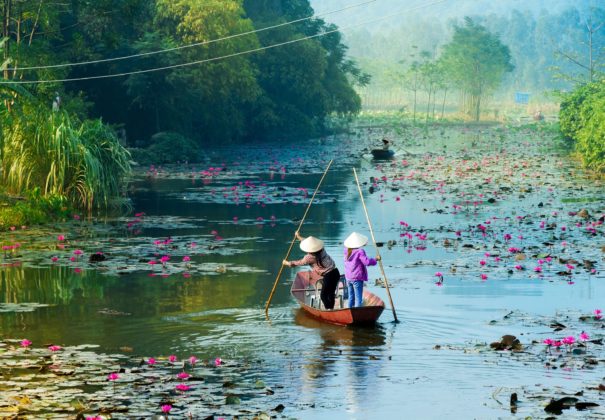 Ethereal Ha Long Bay is considered by many to be the Eighth Natural Wonder of the World. Board an elegantly appointed ship designed with all the modern conveniences to ensure smooth sailing for an incredible once-in-a-lifetime experience.

The backdrop of the bay’s magnificent scenery and dramatic limestone cliffs and rock formations provide you with the perfect setting for a memorable sojourn. 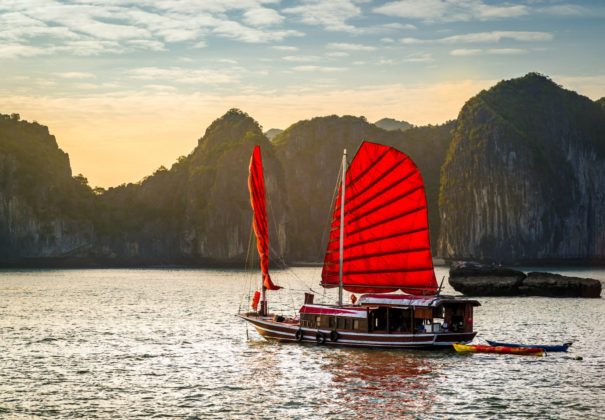 Spend the morning sailing across the emerald waters of Ha Long Bay with more than 2,000 small islands rising from the water like a dragon’s back.

Later in the morning, disembark the ship and transfer to Hanoi Airport for a short flight to Siem Reap, Cambodia, the gateway to Angkor Archaeological Park, a UNESCO World Heritage Site and the former capital of the Khmer empire. 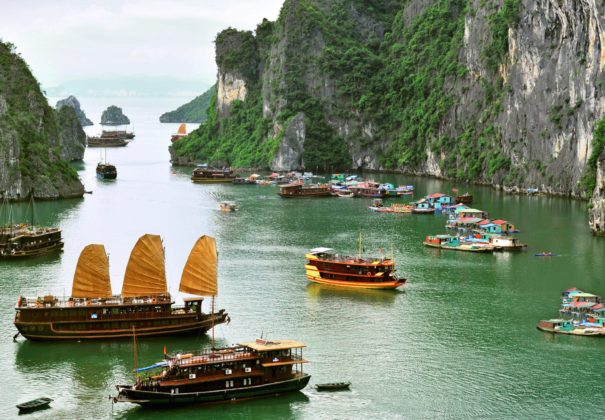 The 124-passenger AmaDara launched in 2015 and is in a class unto itself with distinct French Colonial décor and accented by Mekong artefacts made by native craftsmen. Elegantly appointed staterooms are 251 sq. ft. and suites range from 366-502 sq. ft. Staterooms and suites feature twin balconies, both a French and outside balcony, so you can enjoy the ever-changing scenery however you wish. Additional stateroom amenities include a cosy sitting area, climate-controlled air conditioning, in-room safe and mini bar. Spacious bathrooms have a shower, bathrobe, slippers and hair dryer. Suites have additional enhanced amenities with a large sitting area and bathrooms with both a shower and separate tub. AmaDara offers a host of added comforts and conveniences, including a spa, fitness room, gift shop, hair salon and Sun Deck pool. The stunning Saigon Lounge provides a wonderful place to meet fellow guests, and enjoy colourful and vibrant local entertainment, including traditional Khmer Psara dancers and lively musical performances. Savour authentic regional delicacies and Western cuisine in the main restaurant or dine at The Chef’s Table speciality restaurant; and throughout your cruise, be treated to unlimited complimentary wine with lunch and dinner, as well as house brand spirits, local beer and soft drinks. 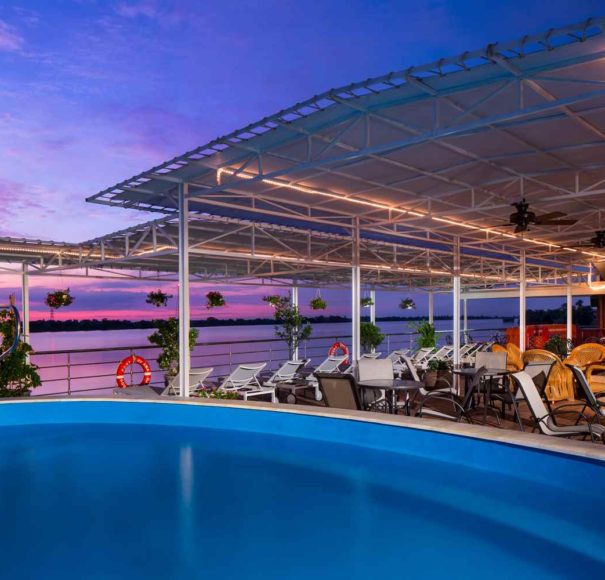 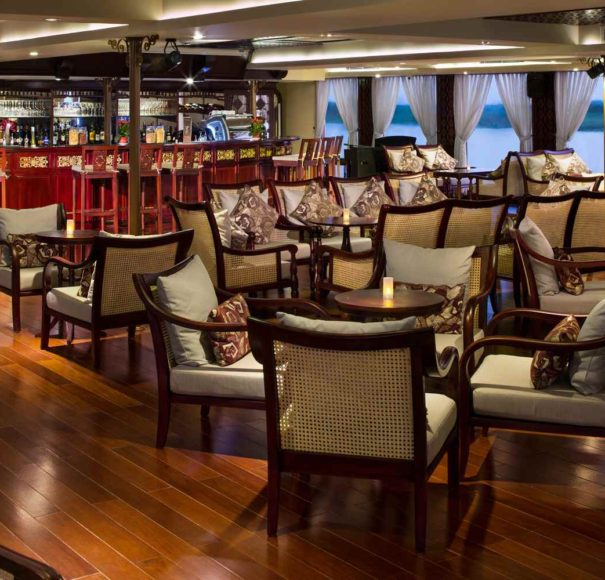 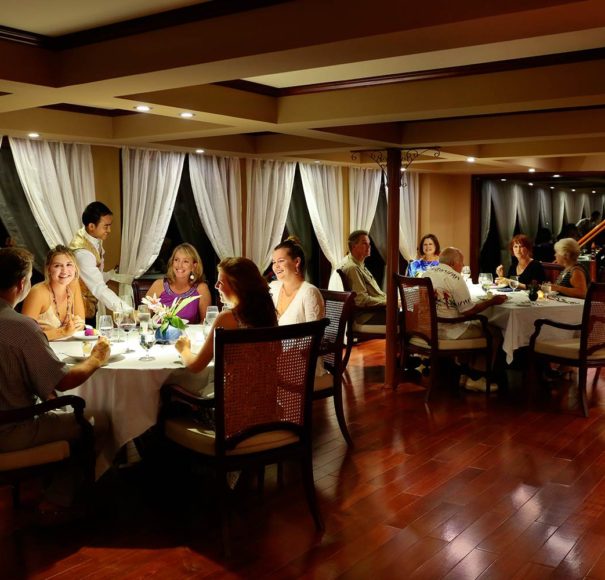 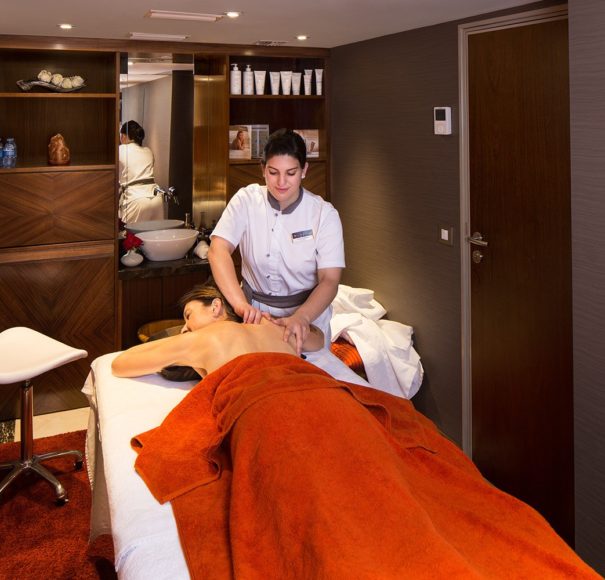 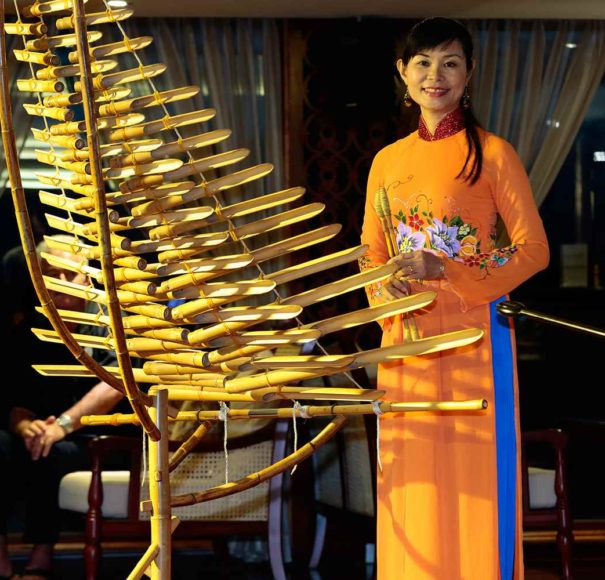 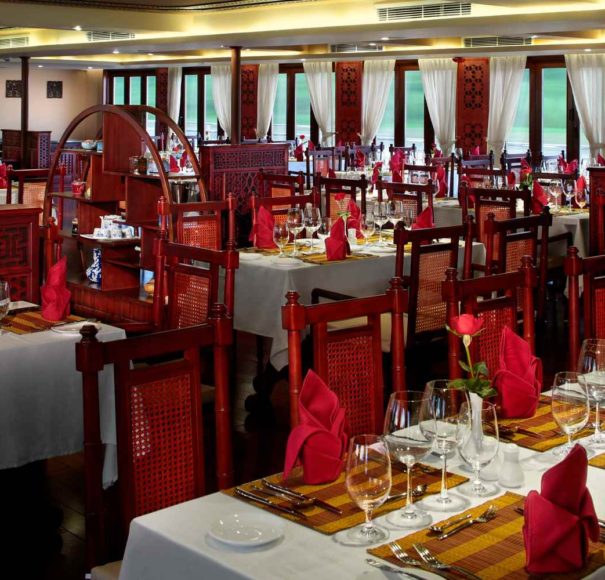 62 spacious, elegantly appointed staterooms and Suites range in size from 251-502 sq. ft, all feature a French balcony and Outside balcony, so you can enjoy the ever-changing scenery however you wish. Suites feature added enhancements, including a larger sitting area and bathrooms with both a shower and a separate bath, staterooms and suites amenities include Entertainment-On-Demand, climate-controlled air conditioning; plush towels, bathrobes and slippers telephone, safe and hair dryer, mini bar with bottled water replenished daily, and an in-room safe. 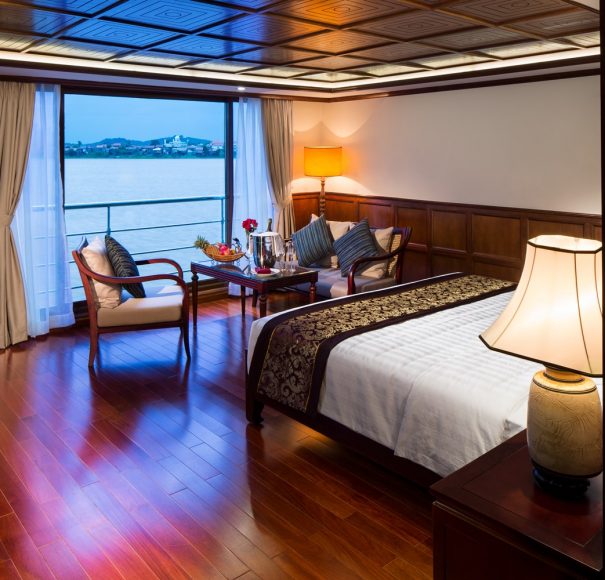 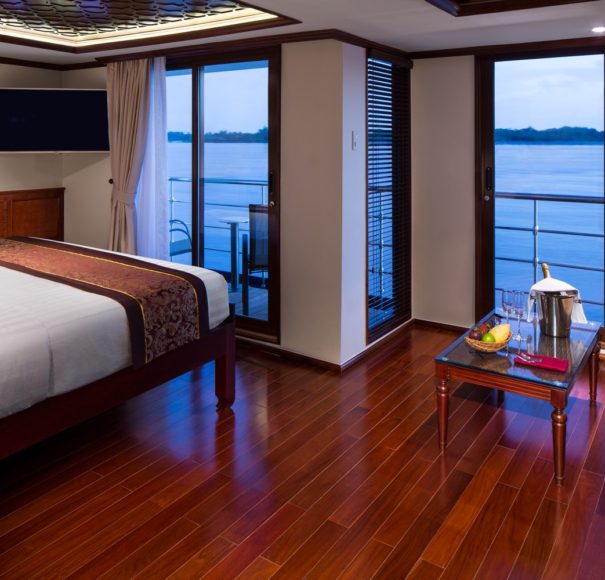 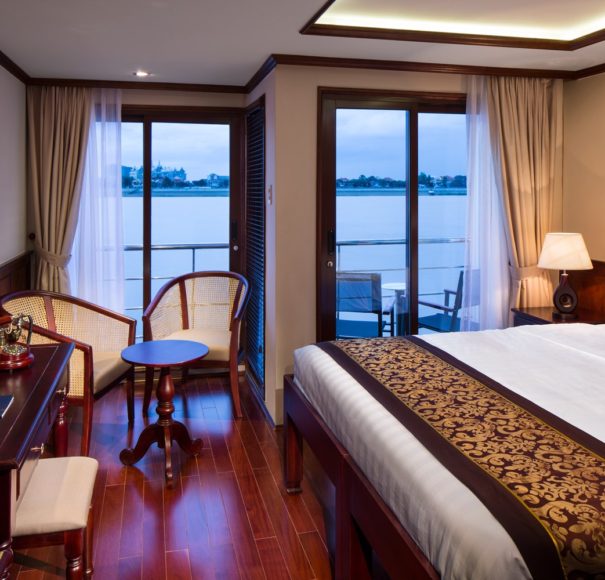 Fares displayed are cruise only, please call or enquire online for flights.

Visa – A visa is required for travel to Vietnam and Cambodia. Passengers with a cruise and land itinerary must obtain a multiple entry visa for Vietnam (as there are two different points of entry into the country) and a single entry visa for Cambodia. Please consult with your Consulate for more information.

AMA’s included excursions go beyond the ordinary with small group tours exploring the culture and traditions of the places you visit as well as the main sights.  Real destination enrichment and deeper understanding is already included in  the cost of your cruise. Flexible Itinerary options We can offer the Riches of the Mekong as a 7 night cruise only holiday or with any or all of the following flexible city stays Hanoi & Ha Long Bay – 2 nights at Sofitel Legend Metropole, Bed & breakfast (or similar), including a city tour, a trip to see the famous water puppet show.  1 nights overnight stay onboard an elegant ship in Ha Long Bay. Siem Reap – 3 nights hotel in Siem Reap at the Sofitel Royal Angkor Phokeethra Golf & Spa on Bed and Breakfast (or similar), including an archaeological park tour of Angkor. Ho Chi Minh City – 2 nights hotel stay at Sofitel Saigon Plaza on Bed & Breakfast (Or similar), including a city tour. All transfers between the ship and hotels are included, and services of a professional cruise manager throughout your cruise and land stay.

Begin in bustling Ho Chi Minh City, then, start your cruise on the Mekong River with a visit to a colourful local market and a sampan builder.

Encounter untold wonder as you weave through the captivating landscapes of Cambodia and Vietnam, experiencing the time-honoured customs of these vibrant nations.

A Journey on the Mekong

From great cities to backwater villages, gain an authentic insight into local life as APT guides you through the wonder of Vietnam and Cambodia.