For centuries, the rivers, canals and lakes of northwest Russia provided the tsars with a serene and luxurious means of travel between the imperial powerhouses of Moscow and St Petersburg. It is still the most relaxing way to experience two of the world’s greatest cities – Moscow, with its imposing icons and colourful cathedrals, and St Petersburg, with its palaces and museums brimming with priceless treasures. This superb value cruise includes extended stays in both and, en route, a glimpse into Russia’s timeless rural life, revealing perhaps a few of the secrets of a country famously described by Winston Churchill as ‘a riddle wrapped in a mystery inside an enigma’. 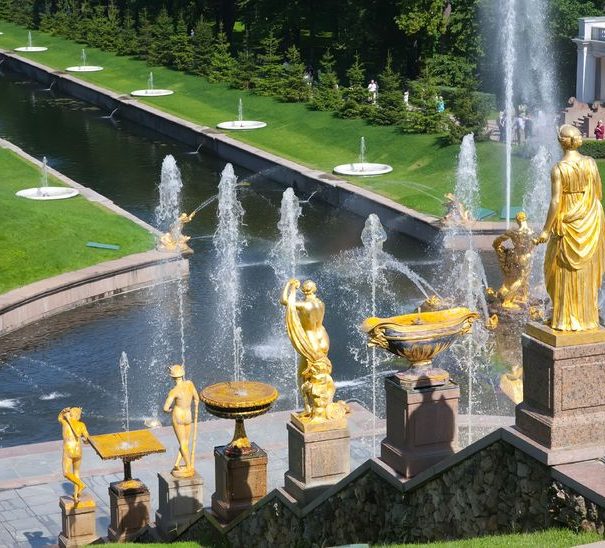 Titan Travel VIP door-to-door travel service collects you from home, for your flight to St Petersburg. On arrival, we transfer to MS Rublev (2T), with time to settle in before dinner on board.

The Russian city St Petersburg is a city of haunting magnificence; an imperial capital that seems to have been built as a monument to its own passing. The city has witnessed so many dramatic events that one may find it hard to believe that St Petersburg is a mere 300 years old. Founded in 1703 to be the most European city of Russia, it remains Russia’s ‘Window to the West’ – just as Peter the Great envisioned it to be. Whilst here, we will visit the extraordinary Hermitage Museum, one of the largest and most respected art museums in the world, containing works by Da Vinci, Rembrandt and Michelangelo. There will also be an orientation tour of the famous sites, including Palace Square. The opportunity to visit Peterhof Gardens, built by Peter the Great to impress European royalty, will also be available. Here, over 175 fountains dominate the gardens, including the Great Cascade, in front of the palace that commemorates the Russian victory over the Swedes in 1709. In the evening of day 3 we set sail from St Petersburg. 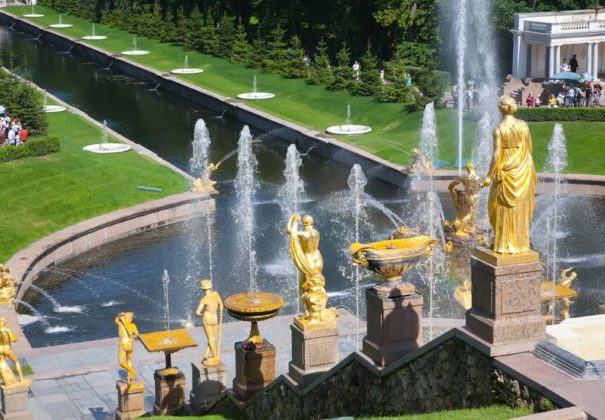 Today, we visit Mandrogi, a reconstructed village, built on the shore of the Svir River to illustrate the traditions and lifestyle of Russia’s past. Inside the wooden houses are many craftsmen working to make matrushkas, lace, ceramics, and other souvenirs. This afternoon, you cruise the Svir River, connecting Lakes Ladoga and Onega. 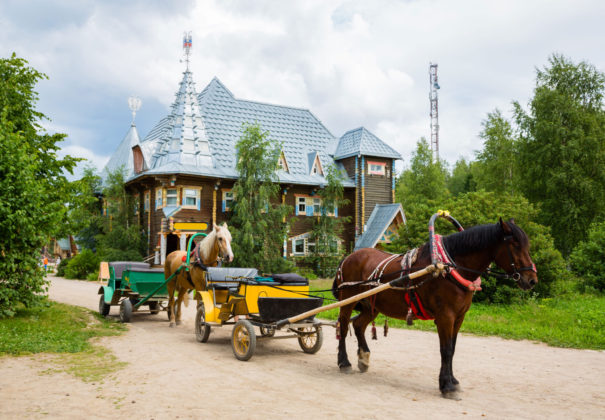 The Kizhi Open Air Museum of Architecture is located on ancient land, where heathen rites were held. Here, we explore 18th century wooden churches, built without a single nail, and a wooden octagonal clock tower. This afternoon, we cruise Lake Onega, the second largest lake in Europe and one of the world’s purest. 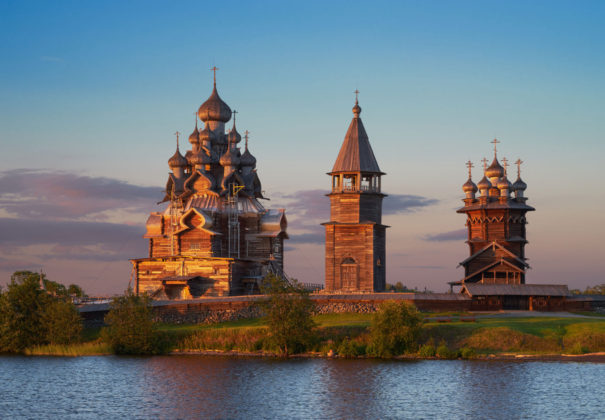 An afternoon arrival in Goritsy, a peaceful farming community, where your cruise stops for a few hours. Whilst here, we will visit the vast Kirillo-Belozersky Monastery, built in 1397 on the banks of the Sheksna River and once the largest monastery in Northern Russia. 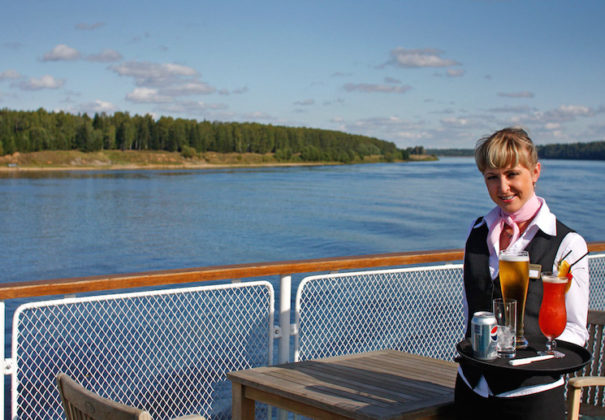 After sailing Lake Rybinsk, we arrive in Yaroslavl known as the ‘Russian Florence’, founded nearly half a century before Moscow in 1010. On our city tour, we visit the Church of Elijah the Prophet, an incredible structure filled with 17th century frescoes, and the 12th century Transfiguration Monastery, with murals depicting St John’s apocalyptic visions. 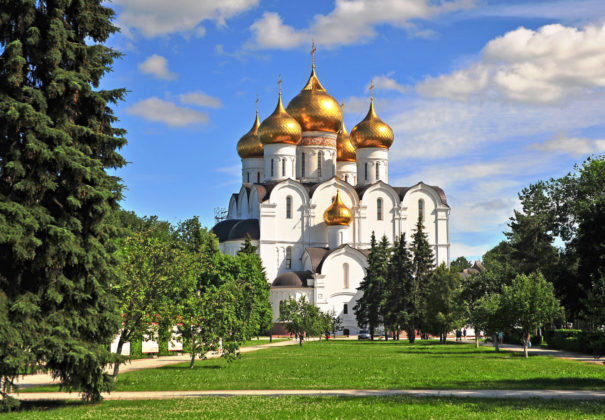 The approach to Uglich is one of the most memorable sights of your cruise along the Volga. From the river, the view of the town with the Cathedral of the Resurrection and St John’s Church looms on the horizon. Despite Uglich’s incredible beauty, it has had a disturbing history including the murder of Ivan the Terrible’s son, Tsarevich Dmitry, in 1591. On our walking tour, we will explore the Church of St Dmitry on the Blood, built on the spot where his body was found. 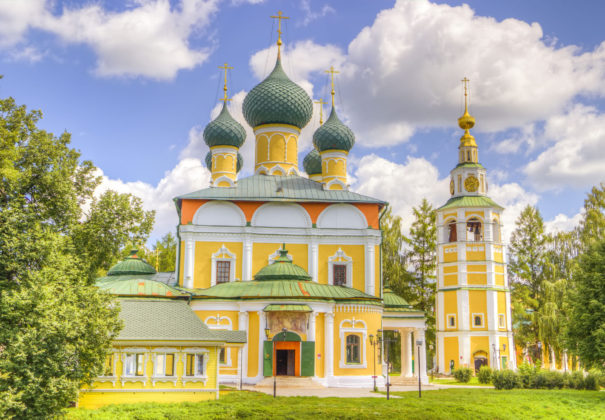 Moscow, the capital of Russia, was founded in 1147 by Prince Yuri Dolgoruky as a fortress on the banks of the Moskva River. During its 850-year history, it has witnessed times of glory and darkness, growing into the centre of Russian political, cultural and economic life. An orientation tour includes the famous historical centre of Moscow, Red Square; see the fairytale St Basil’s Cathedral in its colourful Byzantine splendour and shop in GUM, the largest department store in Moscow. We will also take a tour to the Kremlin, the oldest, most characteristic part of the Russian capital, and the symbol of Russian and Soviet power. Free time allows for further exploration. You may like to visit the Armoury Museum, located inside the Kremlin. It was built in 1851 as a factory for making weapons and armour and today it houses a museum in which an enormous collection of Soviet national treasures are displayed, including the famous Fabergé Eggs, as well as spectacular jewels. Or perhaps visit the stations of Moscow’s Metro, that have often been called the ‘people’s palaces’, for their incredible, elegant designs and lavish use of natural stone materials, mosaics and chandeliers. 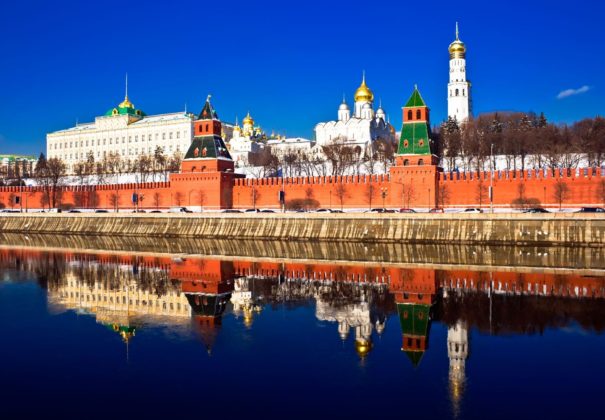 Transfer to the airport for your return flight to the UK. Upon arrival your Titan vehicle will be waiting for the journey home.

Completely refurbished in 2011, the MV Rublev is perfectly suited for exploring the Russian waterways.
MV Rublev is also part of the same family as MV Surikov, one of the oldest cruise operators in Russia with over 150 years experience.

The ship is able to carry up to 240 passengers, so you are assured a lively, sociable time on board. There are plenty of places to mingle or relax with two restaurants and three bars for you to choose from. Or you can just sit back and enjoy the passing views from up on the sun deck.

You can gain an insight into Russian culture too with evening entertainment by local performers on board at least once during your cruise. There is also a souvenir kiosk on board and a laundry service is available or an additional charge.

Each of the 146 air-conditioned cabins are compact and basic yet comfortable and feature a refrigerator, built-in wardrobe and a small en suite bathroom with shower and wc. 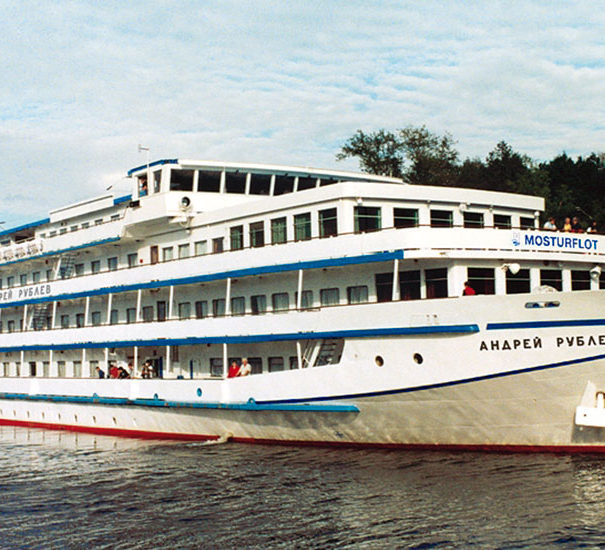 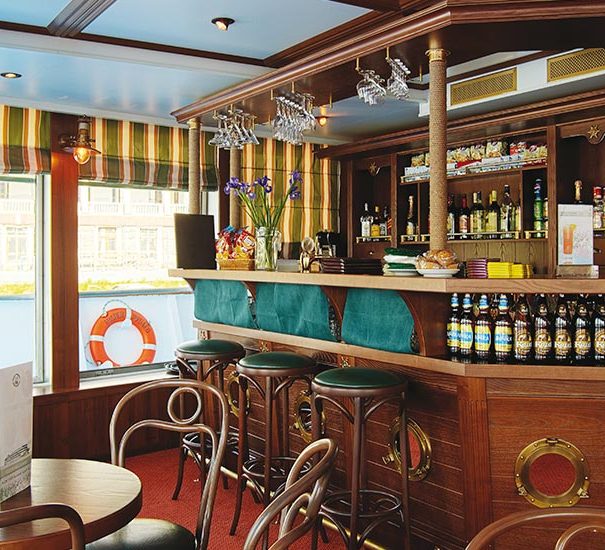 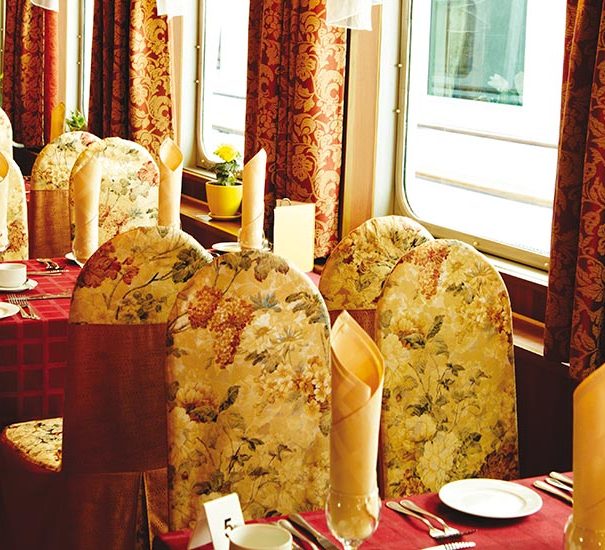 Rublev is a comfortable 5-deck ship built in Germany in 1981 and totally renovated in 2011. Equipped with modern navigation devices this ship features sophisticated facilities. The Rublev’s public spaces include 2 restaurants, a bar with a dance floor and a lounge area with a bar counter. All are exquisitely furnished. The total passenger capacity is 240 persons. 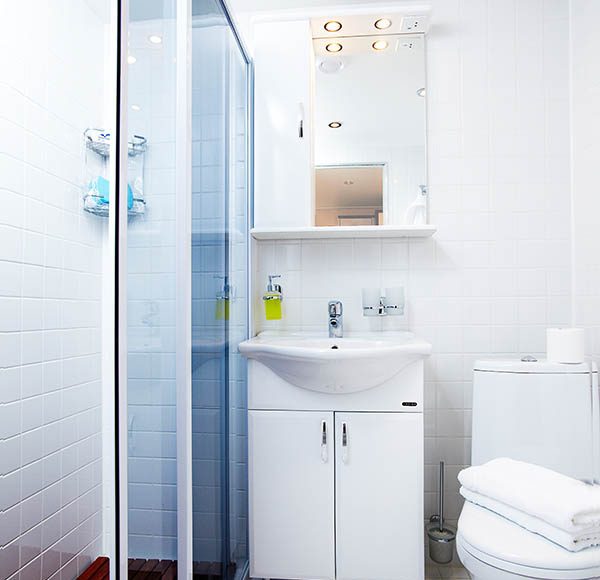 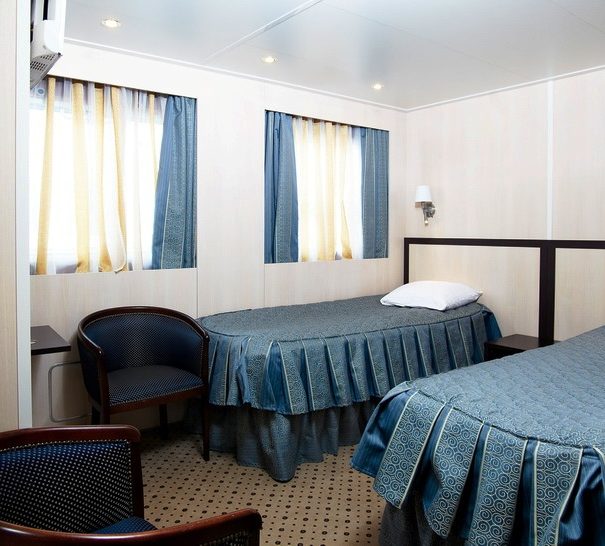 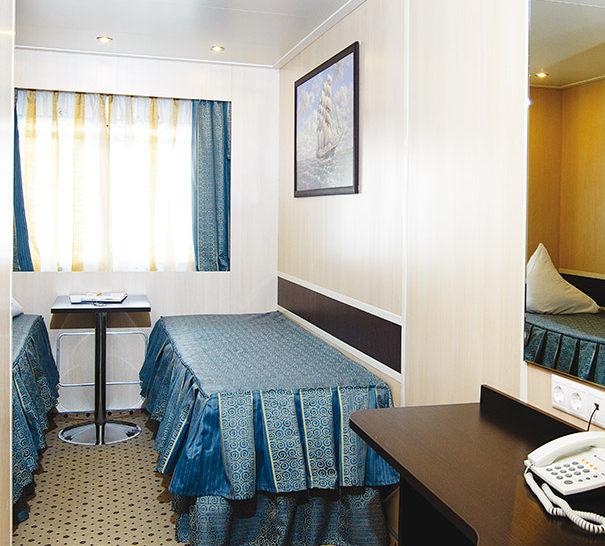 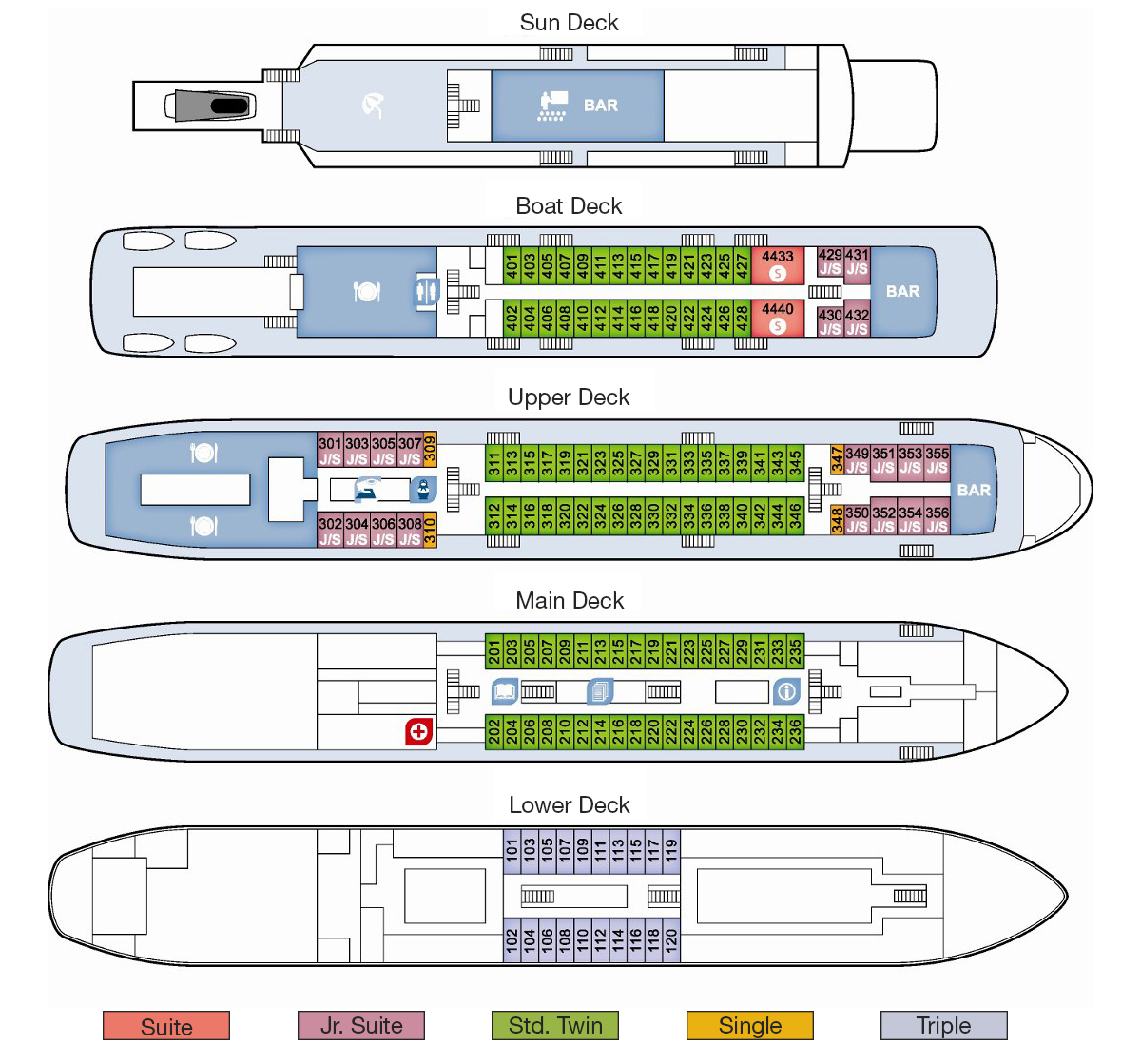 IMPORTANT INFORMATION VISA REQUIRED A Russian Visa must be arranged in advance, for an approximate cost of £240 per person. Please note that current Russian visa regulations require a personal visit to the Russian Embassy in either London, Edinburgh or Manchester to complete the application process, which is at your own cost*. *The cost and process to obtain a Russian tourist visa can change at any time, please contact the Russian Embassy to confirm the full details. • 31 May, 10 July & 8 September 2018 and 2019 operate in reverse – please call for details. • 10 June 2018 departure coincides with St Petersburg’s ‘White Nights’ season, where residents enjoy almost round-the-clock daylight and find cause for celebration. • This tour requires a reasonable level of mobility in order to enjoy it fully. • Russian vessels should not be compared with the more modern ships on European rivers. Cabins are relatively small, with wet-rooms in cabins. MS Rublev is not equipped with wheelchair access or a lift and does not have extensive soundproofing, therefore some noise from air conditioning and other machinery on board may be experienced at times.

Titan Travel is the only escorted tour river cruise operator to offer free home transfers on every itinerary and every departure date with no mileage supplement to pay. Titan Travel are also our number one choice for low or no single supplements.  As Titan Travel now charter their own river cruise ship, the MS Serenade 1, not only as a solo traveller do you get picked up from home, but you can look forward to knowing that there will be a group of single travellers on board with you. Or you can cruise with a companion, but you both have a cabin for only a small supplement, subject to availability. As a long-established, multi-award winning touring company, Titan Travel have brought their friendly expertise to their comfortable river cruising. Your fellow travelers onboard will be from the UK and Ireland. We have worked with Titan Travel and their friendly staff for a number of years and are very happy to recommend their overall experience from start to finish.  Celebrating 40 years in business, they are definitely doing something right.