Today was our final full day on the SS Antoinette.  The Uniworld staff are exceptionally good.  As usual we were greeted at breakfast by smiling staff asking us how we were and following up on our conversations from yesterday.  This is not over the top hospitality but a high level of care from staff, that however busy they are are always able to take the time to ask whether you enjoyed the excursion, whether you had tried to specialty of the day or whether there was anything else they could get for you.  I was very pleased to see that my coffee cup was getting filled without me asking – a very important point for a six cups at breakfast girl!

A Morning Visit to Cologne from the SS Antoiniette

Cologne is the biggest and busiest place we have visited. 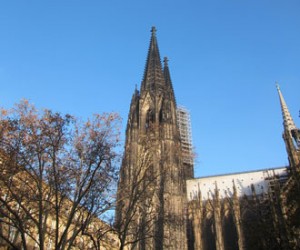 The cathedral took 600 years to build due to its gothic style and the swarms of tourists put you in mind of other European city tourist hotspots such as Notre Dame in Paris.  The Christmas markets were also getting set up and it started to all feel really Christmasy.  Armed with our map from the ship’s Cruise Manager we went off to explore ourselves around the vast array of high end shops and household names which the German consumer seems still to be enjoying.  We ended up going off the map.  We thought it best to route march back just in case we missed the 1pm sailing time.  We made lunch with time to spare but felt able to tuck in due to our unplanned exercise.  The roasted suckling pig was amazing as was the fish and chips.  There goes the button on my trousers!

Scenic Cruising along the Rhine to Amsterdam on the SS Antoinette

Now we were scenic cruising again on the SS Antoinette along the busy 21st century Rhine.  Armed with hot chocolate we headed for the private area at the front of the ship for the best view of the industry on the banks, the deluxe riverside houses built by Germany’s new middle classes and watching the captain pick his way through the coal barges, container ships and other river cruisers all the way up past Dusseldorf onto our rendez-vous with Amsterdam.  Some colleagues brought the remains of their wine from lunch and we stayed on the top deck for hours just watching the river going by.  It was heaven. 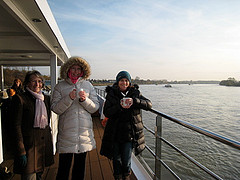 When the cold got the better of us, the staff called us into L’Orangerie for afternoon tea.  We obviously said we were just looking.  But then the small hot scones with jam and cream just begged to be tried plus the German specialty cakes which the Pastry Chef, who was serving them had worked so hard to produce.  It would have been mean to have said no.

Uniworld provides an add-on in Amsterdam for 3 days in a hotel and this is very popular.  A briefing was given to the people taking this option.

Our Farewell Gala Dinner on the SS Antoinette

Time to dress up for one last time and enjoy the food and the entertainment.  The menu lived up to its billing: 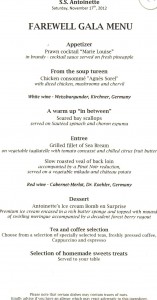 We didn’t have a particularly early night as we were heading into Amsterdam the next day.  Everyone decided to let their hair down and enjoy Greg and Margaret for one last time. 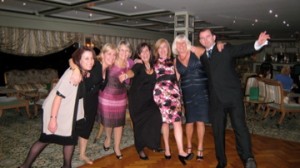 Thank you to everyone at Titan and Uniworld for a fantastic trip.  River Cruising in such style has enabled me to relax, sightsee and enjoy the most wonderful service and food.

I am now going to try a Red Carnation hotel in the UK.  The lady who runs the sister company to Uniworld has just won “Hotelier of the Year” for 2012.  I can’t wait to try it.