We sailed this morning to Koblenz and arrived at 10am.  It is worth mentioning that you can’t feel the motion at all on the SS Antoinette or hear any engine noise.  You are only alerted to movement by looking out of a window.  As someone who feels seasick at the slightest movement it was a dream come true.  No rushing to an open window for fresh air on this trip.  We were able to lie in bed and watch the world go by from our full length window.  Totally spoilt!

There was time to linger over breakfast whilst the scenery passed by the Restaurant de Versailles window.  There was also an epicurean demonstration of how to make a black forest gateux with the executive chef which was great fun.

Visiting Koblenz on the SS Antoinette 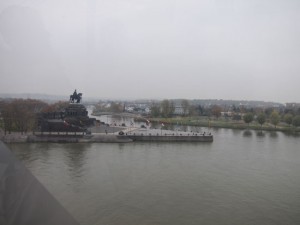 On docking in Koblenz, we once again took our Quietvox machines and our numbered cards and followed guide number 5 around the fascinating town of Koblenz.  (This tour also included a gentle walking option).  This city which celebrated its 2000th birthday back in 1992 is at the “confluence” of the Rhine and the Moselle rivers.  The Romans named it  Castrum ad Confluentes (The Camp at the Confluence) which was later corrupted into Koblenz.  Through pretty winding streets and buildings spanning the ages, you learn that 85% of the city was destroyed during the allied air raids of the second world war and as such the city has received extensive renovation and has successfully preserved the ambiance of the old Koblenz.  We took the cable car across the river up to Europe’s oldest fort which gave us an excellent view of all below.

The park on the riverbank, where the ship is moored, contains both the statue of Kaiser Wilhelm 1 and three sections of the Berlin wall as it is dedicated to German re-unification both in the 19th and 20th centuries.

We went all epicurean at lunchtime and were treated to a buffet meal which included the executive chef offering us three different types of sausage and a huge dolop of sauerkraut.  There were even three different types of mustard  Having started off the week opting for the lighter options I was now happy to accept at least another three of the hot choices onto my plate at lunchtime as it was all just so good.

The afternoon was free time for those that chose not to take the optional tour to the 750 year old Marksberg castle.  It was time for a bit of present shopping for the family in what is a sizable German city but very easy to walk around.

Once back on board we tucked into afternoon tea and then went to the Captain’s wheelhouse visit.  Captain Jort gave a very entertaining explanation of how the nautical side of the ship is handled and the training of the sailors.  He himself has worked his way up to Captain within Uniworld and seems very happy with his nautical life.  There does generally seem a longevity of the Uniworld staff which always tends to be the sign of a well run company.  Especially when they come from so many different countries and English is not their native language, the human touch is even more important to bridge cultural barriers.

Tonight we had a disembarkation briefing in the Salon du Grand Trianon.  Passengers would be leaving for Amsterdam airport from as early at 5am on Sunday morning for those that were connecting with transatlantic flights.  If anyone needed train information then the SS Antoinette staff would do the research.  All bags got colour coded tags dependent on transfer time and each customer had to ok the bag onto the vehicle, so none could be misplaced.  Very straight forward and well explained.  Breakfast was available in some shape or form for even the earliest risers.  Gratuities settlement was also explained.

For dinner this evening I chose the lightest options from the main menu: vanilla-pineapple shooter for the appetizer, beef consomme with pancake strips which was delicious and then Beatrice Tollman’s spaghetti pomodoro and left out the pudding.  However, the wine was still free flowing and probably made up for my calorie counting on the food! 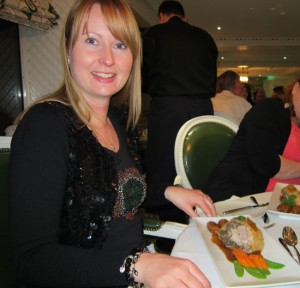 As the ship was docked in Koblenz until 11pm, there was chance to sample some of the portside bars as well as the entertainment on board.  As we’d stayed up late the night before we stayed for a little while to listen to the show songs sung by Tony & Florina Lettieri in the main lounge which went down very well with the guests from the US.  Some of our group went to the Leopard Bar for cocktails and board games. 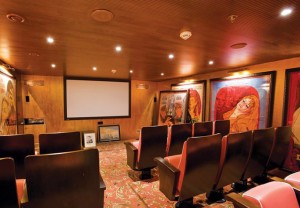 There is also an on board cinema which has the comfiest leather reclining chairs and puts you in mind of somewhere that Frank Sinatra would have had in his mansion.  There is a daily programme at 10am, 3pm or 9pm with popcorn and ice creams included.

But we decided to go for an early night in the cabin and choose a film from a massive selection including pretty new releases.  We chose “The Help” not realising that it lasted 3 hours.  Lights out at 1am!  Not as early as we had wished.