This morning we woke in Rudesheim, the most famous wine town in the region.  We had a more leisurely start to our the day on the SS Antoinette as we were taken to a wine tasting at Castle Vollrads at 10am.  For those who were up earlier there was an excursion to the Mechanical Museum in Rudesheim for which the Cruise Manager had organised a little land train to take the guests to at 8.30am.  There were plenty of early risers who said it was well worth doing as the museum had been especially opened for the SS Antoinette guests.

Wine Tasting at Castle Vollrads on the SS Antoinette 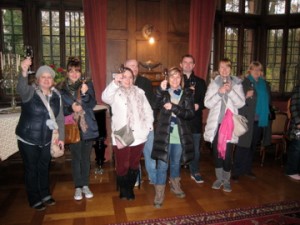 Castle Vollrads has been producing wine since the 14th century and all of them are the reislings.  Our private tour was fascinating as we were split into groups of about 20.  Despite the early hour we were all very pleased to try the three different reislings on offer, one dry, one medium and one sweet.  The explanation of the production processes, the terrior and the history of the winery were all fascinating.  The shop at the end of the tour had exclusive prices for our group which went down very well.

Cruising the Middle Rhine Gorge on the SS Antoinette 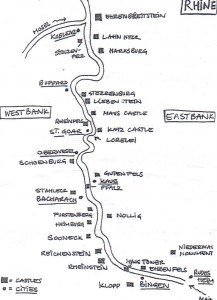 We then returned by coach to the SS Antoinette and settled down for a delicious lunch whilst daytime cruising to Boppard, which was to take us through the “Romantic Rhine” middle Rhine gorge through the castles.  Each guest is given a small map with the castles on, their navigation point in the river. This afternoon we were to pass 20 on our way to Boppard.  The Cruise Manager provided commentary onto the top deck and in the lounge.

We braved the cold to get the best view from the sundeck.  The staff had put out blankets and hot water bottles for us and regularly provided hot chocolate.  Nothing is ever too much trouble  By moving indoors and outdoors we kept warm and I wouldn’t have missed it for the world.  We even cruised past the Lorelei rock. 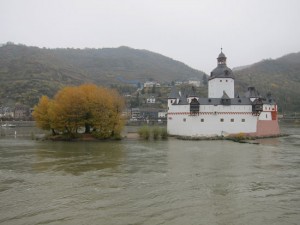 This castle is called Pfalz and sits in the middle of the river.

The SS Antoinette arrived in Boppard by 4.30pm and we were led on a walking tour by the Cruise Manager.  We were then left with free time to sample a gluwein and do a little shopping.

Tonight was Uniworld’s signature “Epicurean Adventurer” dining experience which showcases the cuisine of the area.  We asked our favourite waiter Boris for his recommendations.  We were treated to a traditional potato pancake served with sour cream, red beet mouse and salad bouquet.  Then for the main course we had roaster sirloin with Dornfelder sauce with sauteed peppers, zucchini and oxtail “sheppard style”.  It is worth mentioning that anyone who is less adventurous is able to order something simple like a free range chicken breast or salmon for any evening meal.  I even say one couple order one of each of the starters and mains and puddings at every evening meal and the waiting staff happily obliged.  I think they thought they were on “Masterchef”!

After dinner there was a local La Strada classical quartet on in the lounge who played some stunning gypsy melodies.  However, as we were moored in Boppard overnight we decided to go into town for a drink.  When you leave the ship, even during the day you need to take a room card with you.  This then needs handing back into reception on your return so they know not to leave without you.  We stayed out until 2am and used the opportunity to sample some local beers.