After my first good night’s sleep on the SS Antoinette in my Savior hand crafted bed I took advantage of the shower and L’Occitane products and finished off with the biggest and most comfortable bathrobe I have ever worn – the inside was toweling and the outside cotton and as I am only 5’2″ it came down to the floor.

Today was our first full day excursion.  We needed to be out by 9.15am so went to breakfast in the main restaurant which was buffet style with hot and cold options.  It was perfect for me as there was even skimmed milk and Special K, plenty of beautifully prepared fruit and a waiter able to constantly fill my coffee cup. For those with a bigger appetite at breakfast there was bacon, waffles, pancakes, 6 different types of bread, cold cuts and an egg station where any type of egg can be prepared.  The eggs Benedict my friend had she said was delicious.

Heading to our coach which was parked on the quayside I noticed enviously that some fellow passengers had coffee to go, provided in a coffee house style cup by the restaurant – a nice touch.  Today was a day for touring the Alsatian wine route.  As the guidebook has it, “rolling vineyards, dotted with flower-decked villages, it winds for 170km from north to south below the wooded foothills of the Vosages mountains.” 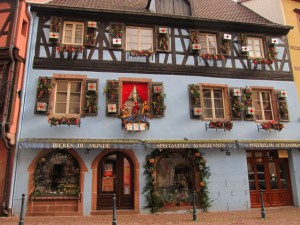 Our first stop was in Kaysersberg, a small village with traditional inns and wine cellars and I spotted my first Kougelhopf.  Our guide, who was using the Quietvox system – an ear piece in the left ear and a small receiver which hangs around your neck whilst he/she talks into a small microphone – told us that the Kougelhopf was designed by a french chef after the defeat of the Ottoman invasion in the region to resemble a Turkish fez.

Back to the bus and our next stop was Riquewihr a bigger but just as pretty wine village who obviously hadn’t been told anyone was coming until the Christmas markets and everything apart from the Caves and a creperie appeared to be shut!  I hazard of going on a Monday in November in France. We then had lunch at leisure and had the ability to either stay on and go to Colmar or as an alternative for those who had seen enough, there was a bus able to take them back to the SS Antoinette about 40 minutes away. 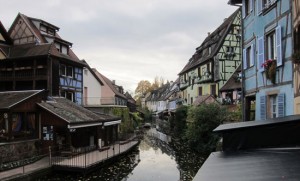 Colmar, in French Alsace is one of the best preserved towns in the region with a flourishing wine trade which dates back to the 16th century.  It has seen great turmoil in its history due to being ruled by the Holy Roman Empire, Sweden and then France.  From 1871 to 1919 it was annexed by the Germans and again during the second world war.  Carefully restored to its medieval magnificience it is hard to imagine what it must have been like for the residents during those years.  Again we learnt about its history thanks to the guide and our Quietvox system. By being able to hear the guide easily without being right next to them this gives a feeling of freedom whilst staying in the group.

Back to the ship to change and 6pm was the Captain’s Welcome Cocktain and crew introduction.  Captain Jord Zwaal, a Netherlander gave us a very amusing introduction and speech and was followed by his wife Julie, from South Africa who is the hotel manager.  This all adds to the sense of family on the ship.  More amusing stories followed and the full staff were introduced.  There were 57 staff to 150 guests which I found incredible.

The briefing was finished by Woulter the cruise manager who presented us with an overview of the week, a very useful document which showed exact timings for visits, sailings, tour bookings and daytime activities.

We were now starting to get into the schedule of the boat and 7pm is time for dinner back in the Restaurant de Versailles, tonight a “Welcome Gala Menu”.  I have included both vegetarian and non to give you an idea of the standard of food.  Seating was open as always but we had worked out by this time that the funniest waiter was serving the middle section of the restaurant and made sure we sat there.  The organisation in the restaurant was amazing. 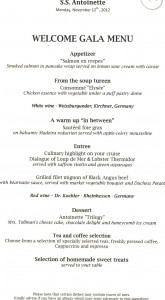 The entertainment in the Salon du Grand Trianon was the onboard musicians again but this time people were dancing, having recovered from their jet lag.  I was pleased to see that the bar had a 10 year old Calvados which I could have as a digestive at a reasonable 5 Euros 50.

Bridges and Locks on the Rhine on the SS Antoinette

We had set sail for Kehl during the meal to arrive about 5am. 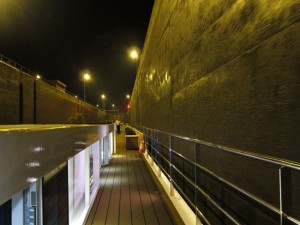 During the evening we weren’t able to use the Leopard Bar due to the low bridges on route.  Amazingly the top of the ship is on hydraulics and can squash down by as much as a couple of metres, dependent on the height of the bridges, but it means that the Leopard Bar and L’Orangerie can’t be used at such times.  But going through locks on the Rhine at night is something else entirely and rather awe-inspiring   Being used to locks in the UK and small, narrow boats and hand worked gates, these enormous industrial structures, flashing lights and the skill of the captain and sailors to get the SS Antoinette into a tight space whilst we ran around the top of the boat for the best view was fantastic fun.